Whilst our relationship with food has changed immeasurably over the last 100 years, not all changes have been positive. Processed food, convenience over quality and snacking rather than family mealtimes have taken their toll on how we eat. However, the tide is turning and to some extent, has been assisted by the current pandemic. We’re eating healthier, cooking more (rather than re-heating) and shopping increasingly locally and seasonally. Below we’ve captured some of the changes – both recent and more established – that have delivered lasting positive impact to the way we eat.

It seems that finally our love affair with the exotic is being coupled with a love of the local. DEFRA estimates that moving food within, to and around the UK equates to 19 million tonnes of CO2 annually - equivalent to 5.5m cars. Thankfully this issue is now being acknowledged in the high street – with significant growth in the number of farmers and “pop up” markets, greater focus on local, seasonal artisan produce and a focus on a sustainable diet – such as Livewell – makes us hopeful for the future.

The UK oozes multicultural diversity, which has had a massive impact on food culture. Our high streets are lined with restaurants that celebrate cuisines from all corners of the globe and our supermarkets carry a huge range of ingredients that were practically unavailable 20 years ago. Perhaps embarrassed by our sub-par performance in the 1970’s, our food culture is now recognised as one of the richest and most diverse anywhere. Even good old fashioned British fish & chips can be traced back to Jewish immigrants who came to London in the 1860s.

Storing an excess of food is a problem that has challenged us for thousands of years. Drying, salting, pickling – all have led to some delicious additions to our dinner plates whilst preserving excess food for leaner times. However, it’s arguably the freezer that has transformed how we manage our food – and how we shop for it. A report by the European Commission identified that 1/3 of food is wasted – which in the UK is approximately 4.5m tonnes of household food waste per year. Despite improving year on year, we’ve clearly still got a way to go – so why not get some soup on the boil then stick it in your freezer?

We deliberated about this for days. Honestly. But our assessment is that despite moped riding, floppy haired chefs and octogenarian bakers entertaining and perhaps infuriating us for the past 20 or so years, we concluded that it’s undeniable they’ve delivered lasting positive impact to the way we eat. We’ve created a generation that wants to cook. We’ve highlighted and started to address the problems with school food (remember the turkey twizzler.) The seasonal, local and wonky has been celebrated. Collectively the Yotam’s, Jamie’s and Hugh’s of this world have moved the game forward and have used their screen time, media presence and column inches for the betterment of society (as well as a bit of self promotion!)

We’ve talked about food waste – but thankfully the last few years has witnessed a transformation in the way we package and transport foods. Over the last 30 years or so, our appetites widened and grew – as did our recycling bins – most of whose contents still go to landfill. However, changes are afoot. 2015 saw the introduction of a nominal 5p charge for a carrier bag (remember “free” carrier bags?) and it seems as if most retailers now recognise that we don’t need apples pre-packed or a net and plastic label around a single clove of garlic. This year it appears that the retailer “must do” is to reduce single use plastics – with the Co-op leading the charge and committing to remove all plastic packaging from its Easter eggs as well as making all of its own brand packaging easy to recycle by the end of 2021.

OK – so Nigella calls it a “meecro-wah-vey”. But to us mere mortals, the microwave is arguably the biggest time saving gadget in our kitchen. Launched in the 1960s (rather than in 1945 when Dr. Percy Spencer first discovered that radar system microwaves could also cook your lunch) the microwave has become a firm friend for the time poor. Despite the previous objections of a certain G. Ramsay, we firmly believe that a device that can turn a can of Heinz’ finest into a hot and healthy lunch in 3 minutes can’t be a bad thing.

A recent study by the University of Bath has found that clearly displayed nutritional information on salt, sugar and calorie content has made people make better dietary choices. Whilst not a panacea, it drives two benefits: a) improving the level of information and hence quality of customer decision making, and b) incentivising manufacturers towards producing better quality food products. As we keep reminding ourselves, it’s often the simplest of things that deliver lasting positive impact.

Everybody seemingly wants to be either a Tom or a Barbara. Those of us old enough to remember the UK’s 9th favourite sitcom will remember Tom leaving the rat-race for a life of simple self-sufficiency in Surbiton. And it appears that we’re all increasingly after a little bit of that too. The mental and physical benefits of growing your own fresh, local and seasonal fruit and veg are invaluable and of course, contribute in many ways to wider societal benefits. Recent studies have shown that demands for allotments have grown (no pun intended) significantly and London has circa 30,000 people on allotment waiting lists. During the pandemic, working in the garden or allotment has been hugely beneficial to many, who swapped the misery of their daily commute for weeding, watering and bee hotel erection, captured in a rather touching article entitled “How Grateful I Am To Michael Gove” from a member of The National Allotment Society.

9: The Rise Of Flexitarianism

The benefits of a more plant-based diet are well documented and understood, but for many, vegetarianism or veganism is a step too far. However, flexitarianism offers significant benefits in terms of health, animal welfare and the environment without the absolute levels of commitment required for a totally plant based diet. The deeply scientific study of one 10 year old male here in the author’s home has made it clear that more “meat free days” are both beneficial and needed, which correlates well with this simple guide from the British Nutrition Foundation .

It’s likely to be a small number of us that don’t have a decent dinner party story. Not an anecdote to tell at a dinner party – but a comic tale of drama, disaster or drunkenness that occurred when we were a guest. They’ve been the stuff of legend and more of us than ever before have felt the need to show off our culinary skills to friends and family. Then COVID arrived and everything became virtual - which we all recognised as being, frankly, terrible. We’re craving the return to normality, with an excess of odd chairs crammed around a table that’s too small. As The Week perfectly captures it, “There will be red wine stains, tonnes of washing up, and it will feel so, so good.”

We’ll drink to that! 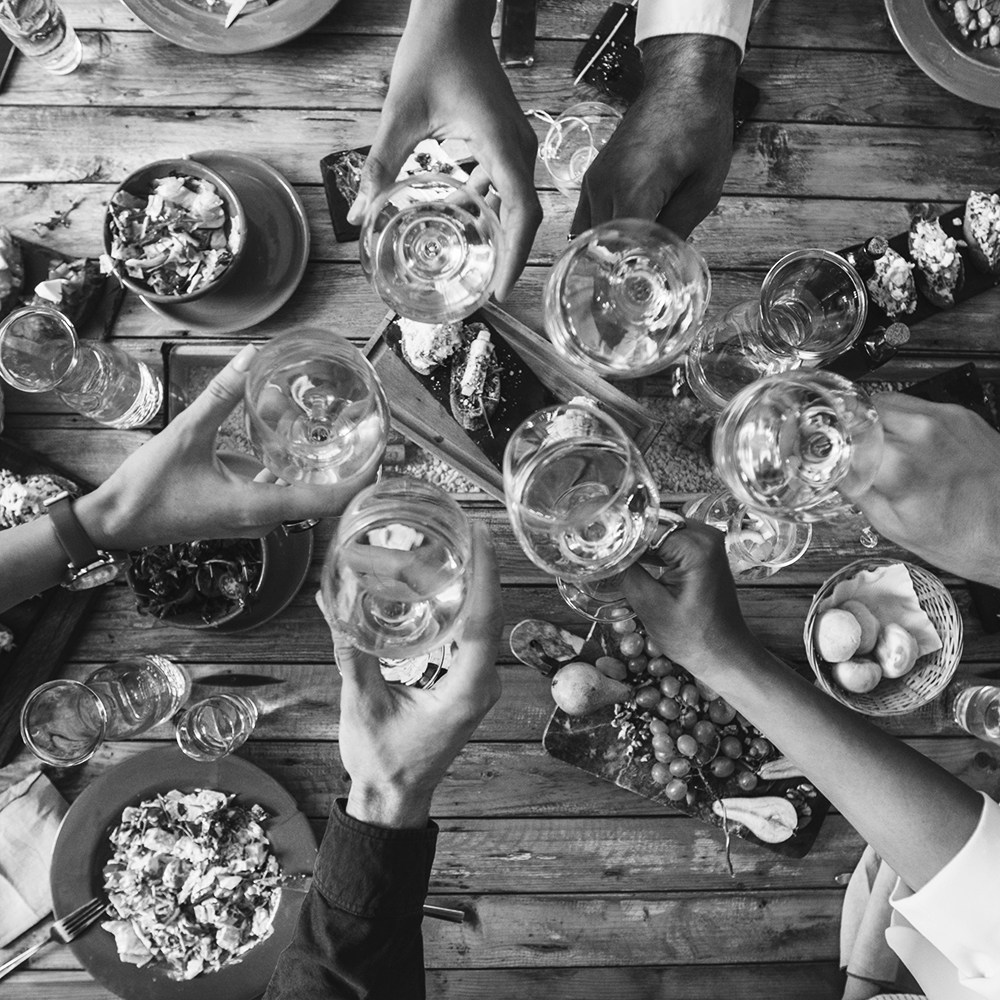